Reporting from Texel: Can we reach sustainable levels of consumption by 2050?

Consumption is a central aspect of our current economic model and a major driver of climate change and environmental degradation.

According to the research recently published by the Institute for European Environmental Policy (IEEP), European citizens will have to reduce their per capita material footprint by 80% by 2050.  This reduction would allow them to not exceed the means of the planet and meet the objectives set in the Paris agreement and in the Sustainable Development Goals (SDGs) – while maintaining a good quality of life.

To find out what European citizens think about our current consumption habits and what more can be done to improve their sustainability, the IEEP went to the Democracy Alive Festival on the island of Texel, in the Netherlands.

Hosted at the European Environmental Bureau Pavilion, the IEEP presented the 2050 Sustainable Living project, which aims to contribute to new social norms for sustainable behaviour. To stimulate change, this process uses transformational communications based on multidisciplinary research – painting a science-based, positive and engaging picture of what sustainability could look like in the future.

Consumption is composed of four main categories – food and nutrition, mobility, housing and lifestyles – all of which are associated with unsustainable consumption patterns. During the session, participants were asked to vote on a number of questions related to each of them.

Primarily due to air travel, mobility was identified as the most unsustainable area of consumption, followed by food and nutrition.

When it comes to the most effective means of triggering change, awareness raising and regulations received the most votes, followed by policy. It was also pointed out that a combination of the three would represent the ideal approach.

For each of the four areas of consumption, IEEP presented three examples of sustainable consumption to be reached by 2050. Participants were then asked for their thoughts on the practices and how feasible they are – if at all. In particular, participants were asked to clarify whether each example was completely feasible (green), only feasible if supported (yellow), or completely utopian (red). The table below summarises the results of this exercise. 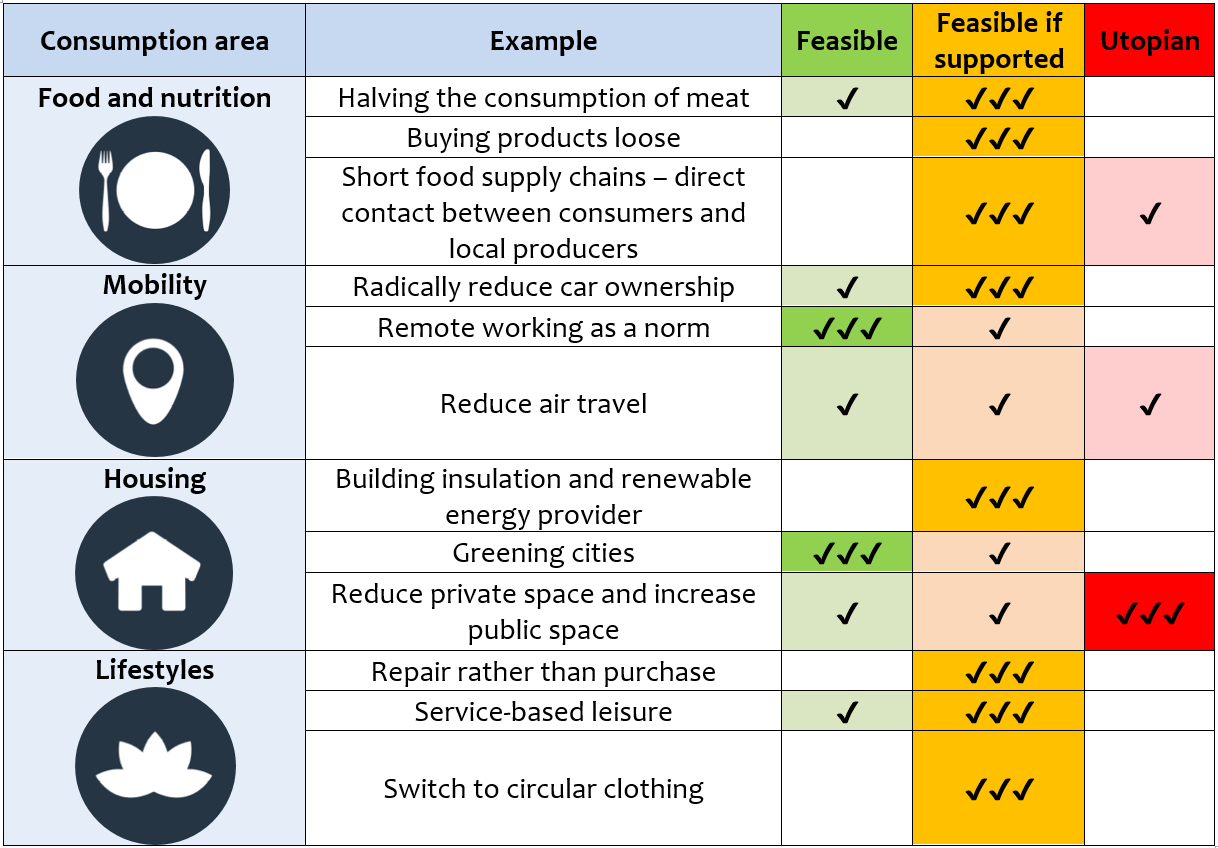 Overall, there was a strong feeling that most elements of sustainable behaviour could be reached by 2050 – if supported by policy, awareness raising measures and regulations.

Only two areas – “greening cities” and “making remote working a norm” – were considered feasible by most participants. This is likely explained by the fact that there are already growing trends towards both practices.

On the other hand, almost all participants pointed to “reducing private space and increasing public space” as the most utopian of all the options. Similarly, the issue of “reducing air travel” was highly debated, with an equal number of participants reflecting mixed views.

The voting triggered a lively discussion on what more can be done to reach sustainable levels of consumption by 2050 and what citizens require to be pushed in the right direction.

The role of economic incentives was emphasised – as well as issues linked to pricing. Cities were mentioned as key levers of change – for instance, in rethinking mobility systems, which in most cities still prioritise cars.

The participants also agreed that citizens need to be provided with more sustainable options, alongside more readily available and clear information on products’ environmental impact.

Overall, the discussions made clear that citizens have a strong general understanding of the issue. On the other hand, there is scope for improvement in the role of policy, regulations and awareness raising to trigger and support more sustainable behaviours.

Ahead of the 2019 elections, IEEP conducted an analysis of the European parties’ manifestos, to assess sustainability commitments. While most parties made commitments on climate issues, there were some blind spots, and sustainable consumption was one of them. This issue needs to be given more priority in the future of environmental policy, and in the next term of the EU institutions if we are to meet the 2030 targets.